Council Participated in the National Wreaths Across America Day – December 18, 2021

“National Wreaths Across America Day has a simple mission: “Remember fallen U.S. veterans; honor those who serve; and teach your children the value of freedom.” This important day is an annual event that takes place every third Saturday in December at Arlington National Cemetery, as well as other cemeteries in the U.S., at sea, and abroad. Wreaths are laid as family and friends remember both those who made the ultimate sacrifice, and those who currently serve in the armed forces.”

On December 18, 2021, members of the Pittsburgh Council helped the National Cemetery of the Alleghenies to Remember and Honor our veterans by laying Remembrance wreaths on the graves of our country's fallen heroes.

The following letter was received by our council coordinator:

On behalf of the Wreaths Across America organization and our family of volunteers and supporters across the country, we want to thank YOU for your support of the Mission to Remember the fallen, Honor those that serve and their families, and Teach the next generation the value of freedom. As Wreaths Across America founder Morrill Worcester told the audience at our recent Appreciation Rally "we've just barely scratched the surface" of honoring every veteran as they so deserve, but we have done so much and touched so many lives, and we could not have done any of it without your support.

During this year's National Wreaths Across America observance, more than two million dedicated volunteers placed more than 2.4 million veterans' wreaths at 3,136 participating locations across the country. At Arlington National Cemetery specifically, the Wreaths Across America program saw 66 tractor-trailers deliver over 250,000 veterans' wreaths that were placed by nearly 38,000 volunteers, many of whom were children, some participating for the very first time.

As I think of those numbers, each of those gravesites, and each of those volunteers saying the servicemember's name out loud and sharing a small gesture of gratitude for the freedoms Americans enjoy, I am immensely humbled. I am also truly overwhelmed with pride for the people of this great nation where so many individuals and communities can come together in unity and support for those who have protected our freedom. I will say it again: THANK YOU. Thank you for your time and your efforts, your sponsorships, and your help in sharing the word. Thank you most of all for taking the time during this busy season to join us in letting veterans and military families know that their service and sacrifice is both seen and appreciated and that they are not alone in their loss.

The Steel City NROTC Commissioning Ceremony was held at Soldiers and Sailors Memorial Hall in Pittsburgh on 21 May 2021.  The unit commissioned 12 Ensigns and two Marine Corps Second Lieutenants. The Guest of Honor and speaker was MajGen Thomas Jones, USMC, (ret).

Ensign Elizabeth Rullo was awarded the Midshipman of the Year Award from the Navy League Pittsburgh Council.  Ensign Rullo received her degree in Mathematics from the University of Pittsburgh and will join the Nuclear Power community as a Surface Warrior. 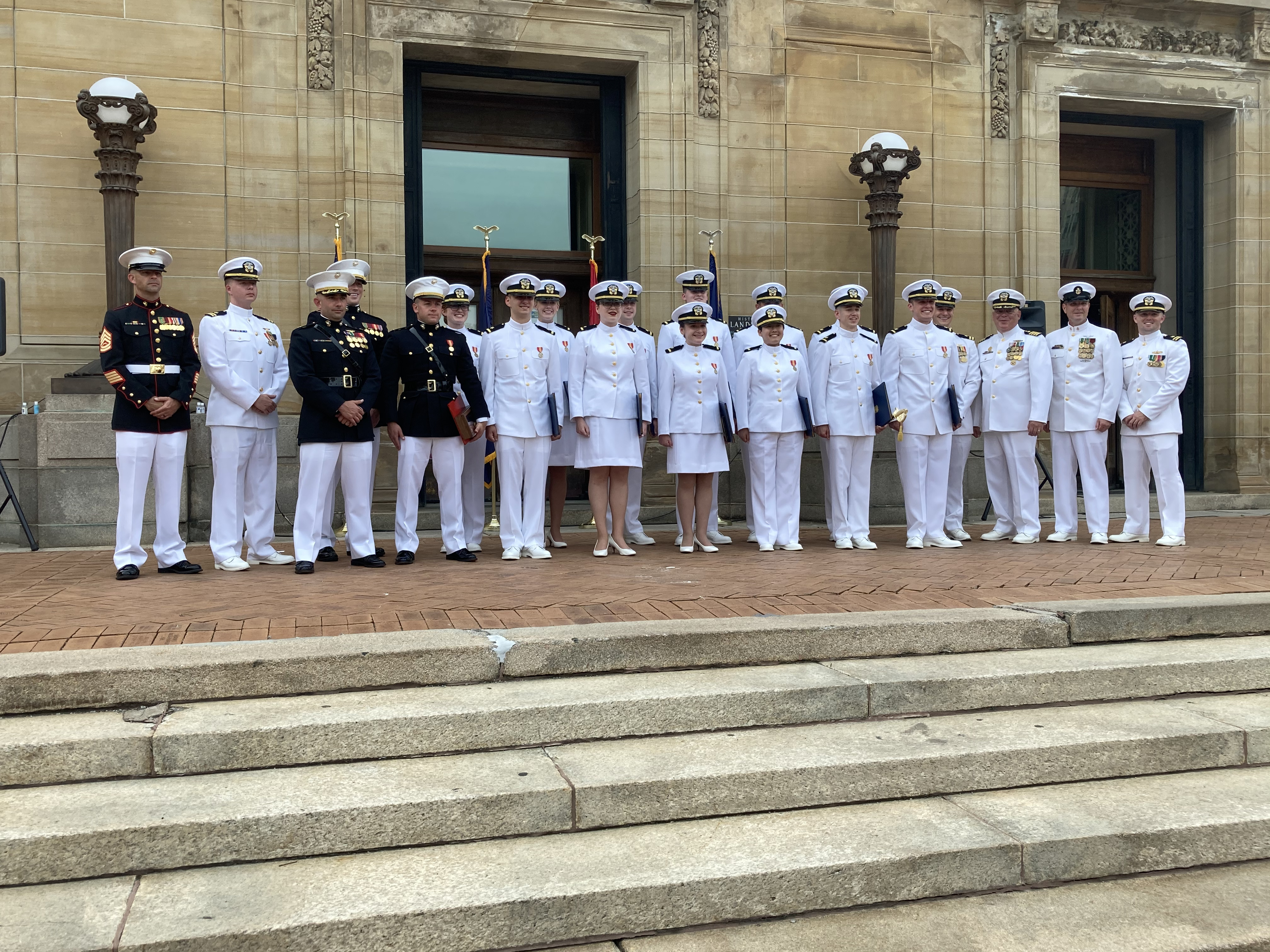 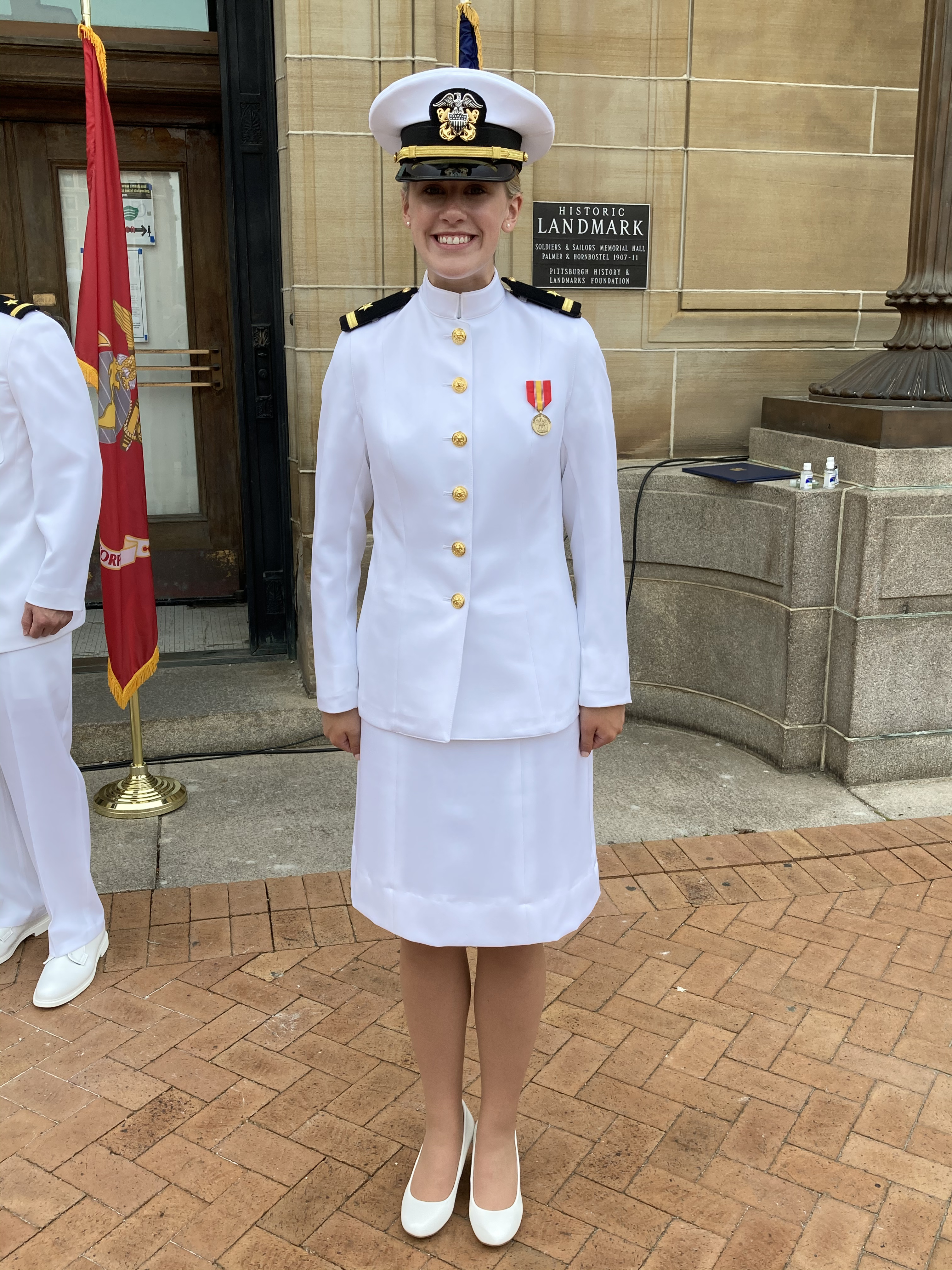 Ensign Elizabeth Rullo was awarded the Midshipman of the Year Award from the Navy League Pittsburgh Council. 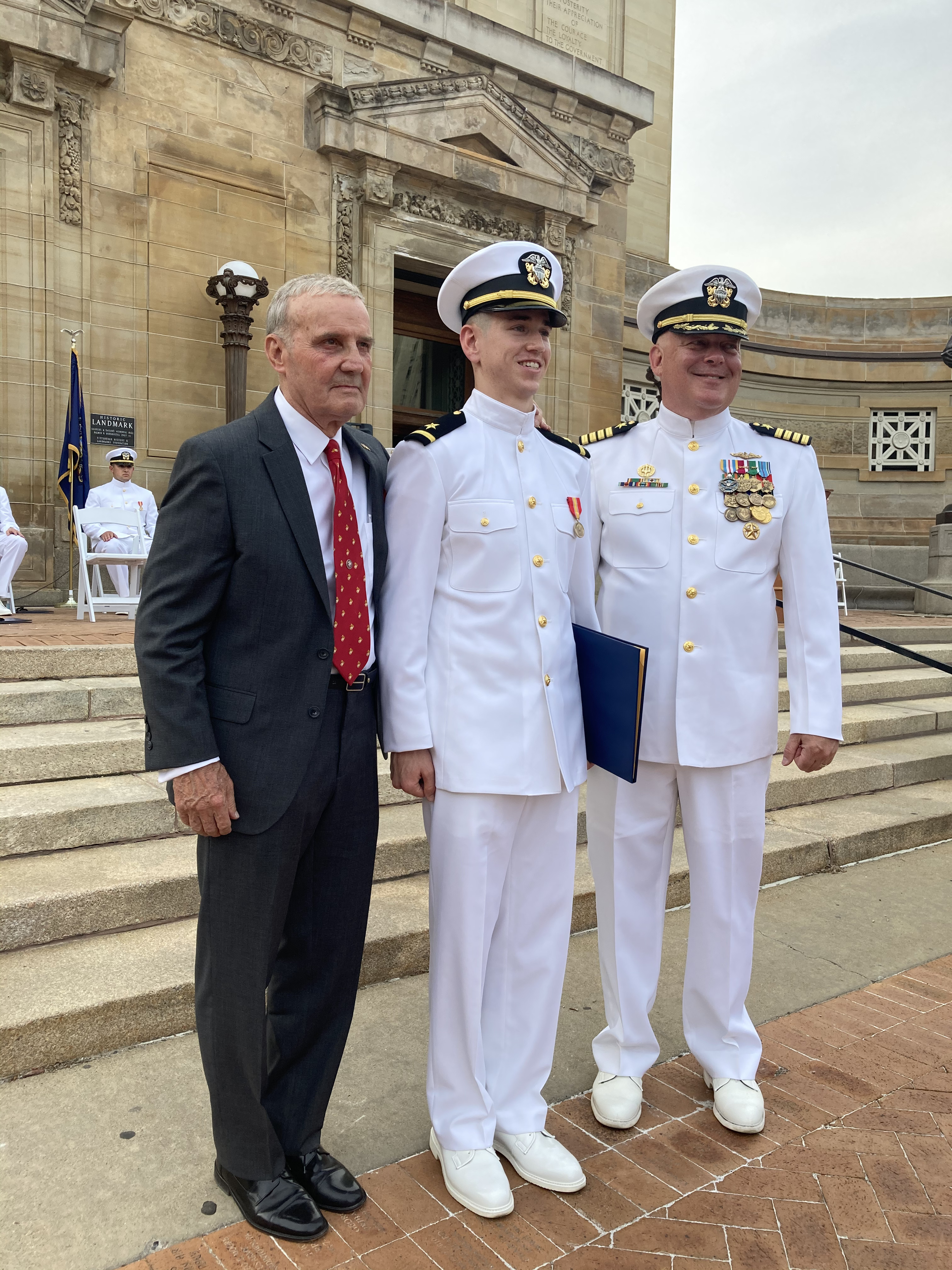 Ensign Matthew Beck was awarded a Naval Officer sword from the Pittsburgh Chapter of the Reserve Officer Association and the Navy League Pittsburgh Council.

Our council participated in the annual Wreaths Across America by laying wreaths at the tombstone of our deceased military personnel in the Cemetery of the Alleghenies, near Pittsburgh.  On National Wreaths Across America Day, Dec. 19, over 2500 locations participated, placing 1.7 wreaths on veteran's tombstones. Our council member, Polly Bozdech-Veater took this picture on that snowy day.

Our Council was honored  to have RDML Aiken present to us in July, 2020.  RDML Aiken is Commander, Carrier Strike Group Three.  His bio is below.

Here's the webinar for your enjoyment.

We had 155 people attending including representatives from the Army, Coast Guard and Air Force.   A great DJ had everyone out on the dance floor.   The food was wonderful ---smoked beef brisket, smoked chicken, and pecan crusted salmon.   The birthday cake from Oakmont Bakery was delicious.

Attendees proudly cut the birthday cake.  From left to right: 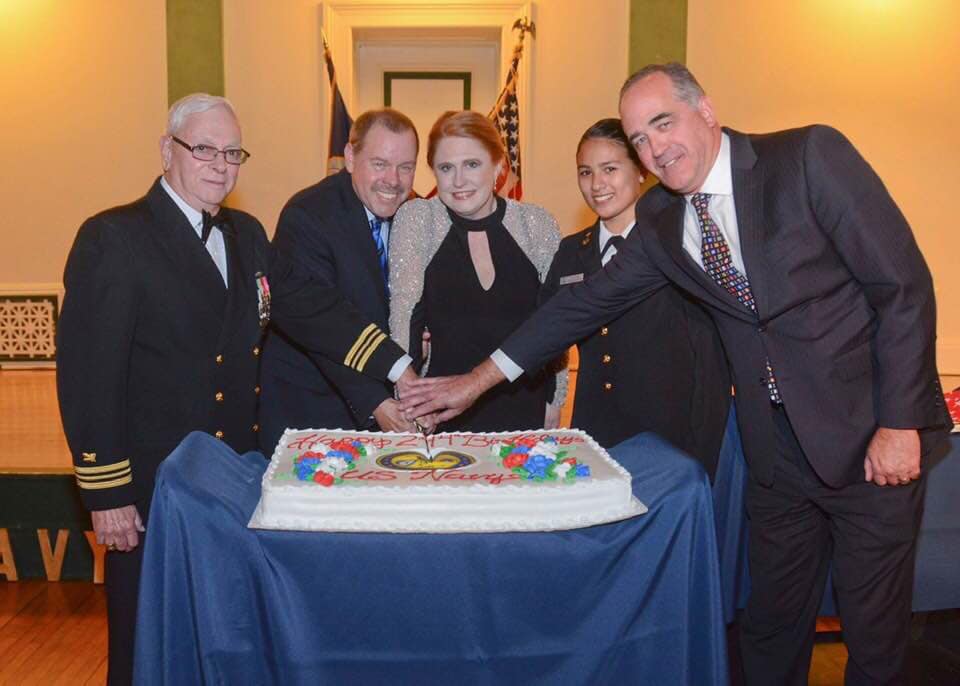 Sailors from the guided-missile destroyer USS Laboon (DDG 58) traveled to Pittsburgh March 18-21 to visit the hometown of their namesake and members of his family.

See the link to the USS Laboon:

See the press release regarding the visit:

The Pittsburgh Council was in constant contact with the three Coast Guard stations in the Pittsburgh and Erie area, including weekly phone calls, visits and dozens of email contacts. The council also helped the Coast Guard locate local and national resources to assist them during the government shutdown, provided gas gift cards worth $1220  total and sponsored two Super Bowl parties. 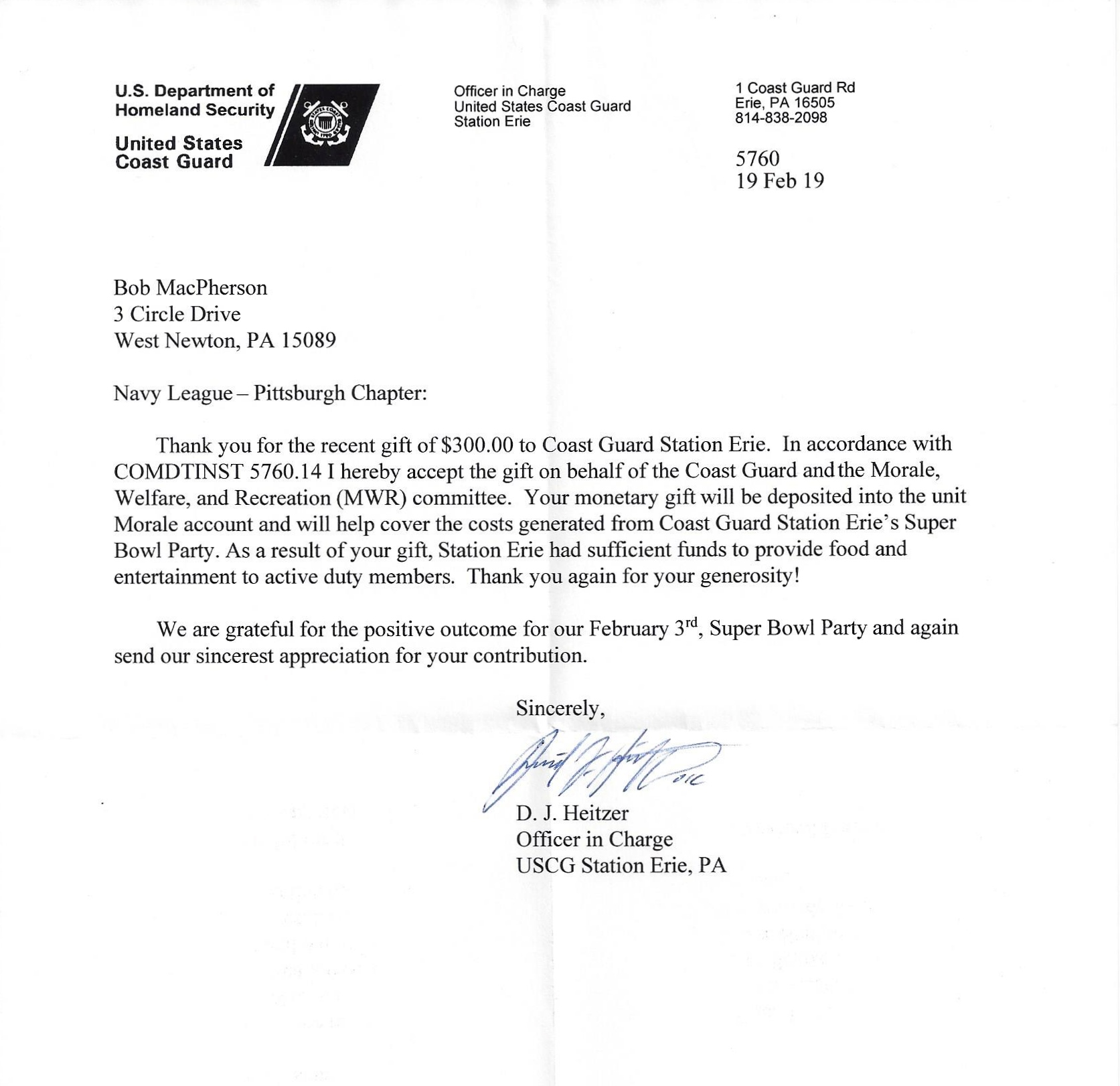 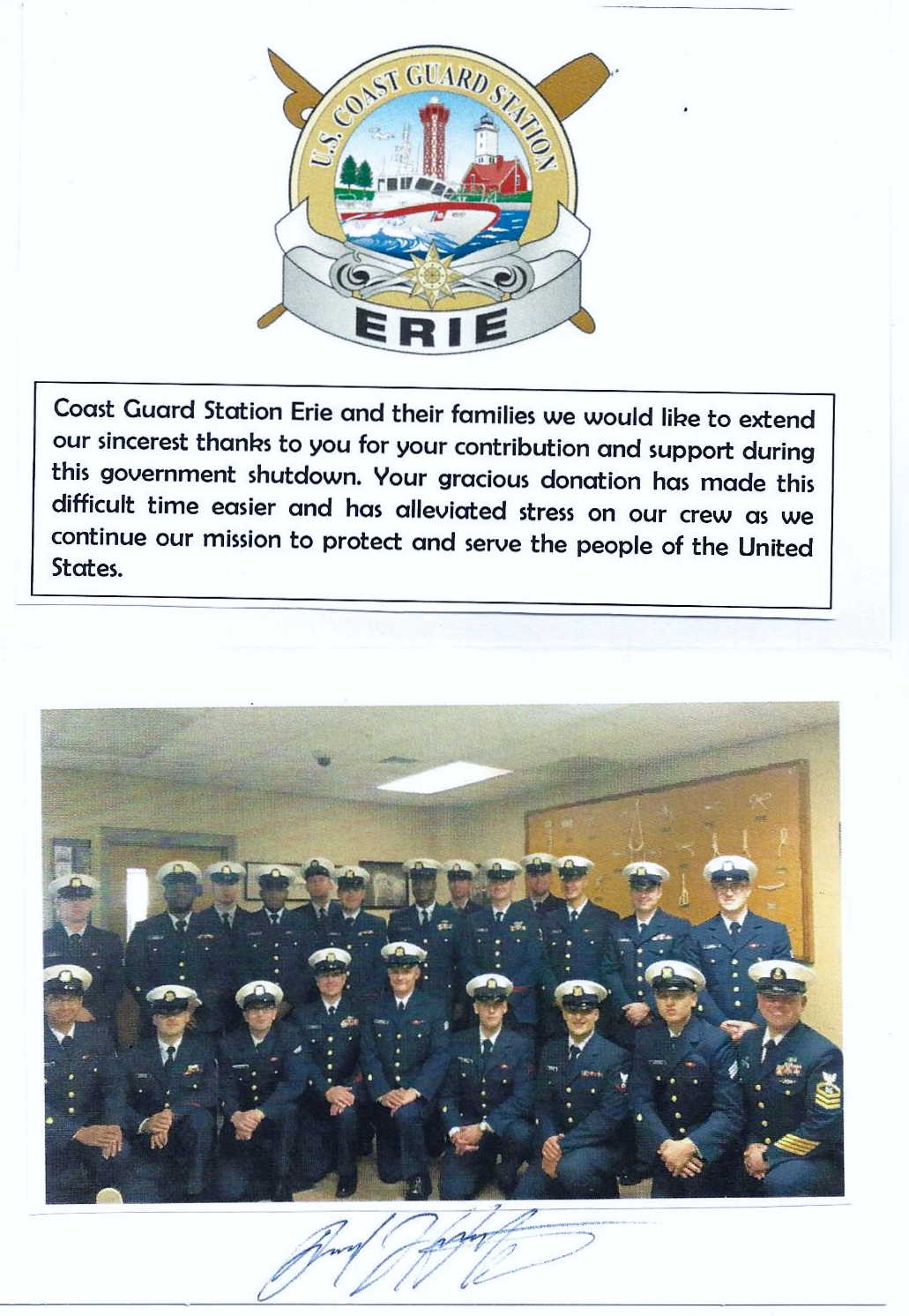 The Pittsburgh Council had a great Navy Ball in Pittsburgh on Oct. 12 with the theme “Forged by the Sea, Tempered by the Steel City.” Rear Adm. David Hahn, Director of Naval Research and past commanding officer of the USS Pittsburgh, was the guest speaker.

This year was the first year in a long time that the Navy Ball was held in the ornamental gathering place where it had been held in years past. The great committee worked very hard to put together all the pieces that would make this work. Feedback from some of our core constituency had indicated that a central location would be more convenient and there are very few locations as nice and affordable as the main ballroom at Soldiers and Sailors. The benefit of having a place so closely tied to the Navy’s history in Pittsburgh was indeed a bonus. The staff at Soldiers and Sailors, the caterers from All the Best Catering and Eric Wenning from Wenning Entertainment bent over backwards to work with us to make this a great event.

Nearly 200 tickets were sold and the crowd that gathered that night to hear Rear Admiral David Hahn (a former CO of the USS Pittsburgh) speak about the future of the Navy and its proud relationship with Pittsburgh.

Lt. Sam Colton played a key role as Master of Ceremonies and kept the program on track and on time.

LCDR Rick Elster, USN Ret., used the Table of Honor Ceremony to remind us of those who were not able to be in attendance because of their sacrifices. We had a special performance by Ms. Antolena Damico, who set the stage with a brilliant rendition of the National Anthem and kicked off the entertainment with two crowd pleasing songs.

There are so many people to thank, including Captain Polly Bozdech-Veater for keeping the program tight and well scripted and Ensign Brooke Houle for her tireless work behind the scenes. If you saw one of the special coins we used to raise funds, you saw her work. It was her design that was used on all our branding. As a bonus, over 650 coins have been sold to date which helped to make sure we kept our budget in control. Thanks to McKeesport-Pittsburgh Chief Petty Officer’s Association and all the committee members for making this an evening to remember.

Most of all, thank you to our many sponsors including Bill Wolffe, CFP, Fragrasso, USAA, Sarris Candy, John Van Huyck, Vic Hulina, Katherine Kersten, CWO2 and Mrs. Bob MacPherson, Captain Jim Bendel, USN Ret, and Dr. and Mrs. Karl Ludwig. Without their generous support, we would not have been able to get this done. 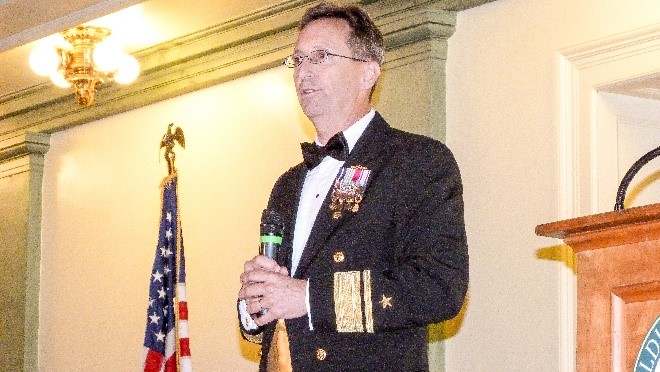 Resources for Military (active and reserve) and families in the Pittsburgh Area - Military Resource List July 25, 2022

In December 2015 our Board of Directors approved a significant revision to our Council Articles and Bylaws to mold our organization in support of our expanded vision.  Here's a link to the new Articles of Incorporation [click here] and Bylaws [click here].  The Bylaws define new roles and responsibilities of the membership to lead us forward.  We look forward to our council having a positive impact in support of the Sea Services.