With the deactivation and the decommissioning of the USS Pittsburgh (SSN 720 submarine) we have moved much of our related content and other material below on this page.

As details are available we will populate this page with information related to the newly named LPD 31 - USS Pittsburgh.

On January 17, 2020 the USS Pittsburgh inactivation ceremony was held in Keyport, Washington.  Here's a link to CO CDR Jason Deichler's Inactivation Speech and a link to the Inactivation Program. 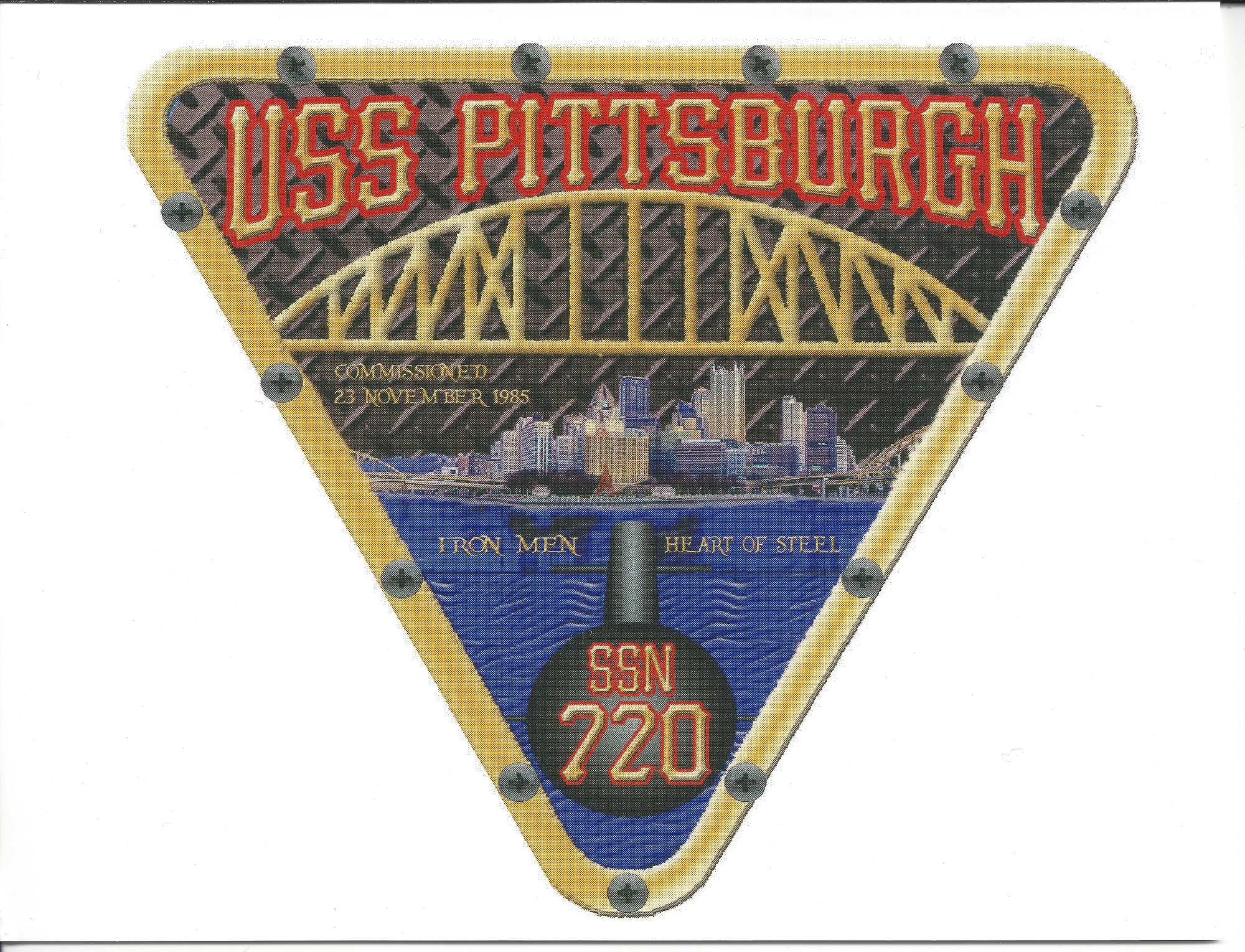 The USS Pittsburgh, SSN 720, a Los Angeles-class fast-attack submarine, arrived at Naval Base Kitsap-Bremerton on May 28, 2019 to begin the eventual decommissioning process.  The USS Pittsburgh was commissioned in 1985 and home ported in Groton, CT.  She was launched on December 8, 1984 sponsored by Dr. Carol Sawyer, and commissioned on November 23, 1985.  We in the Pittsburgh Council are most proud to have supported the crew and boat since its christening.

The Inactivation ceremony was held January 17, 2020. 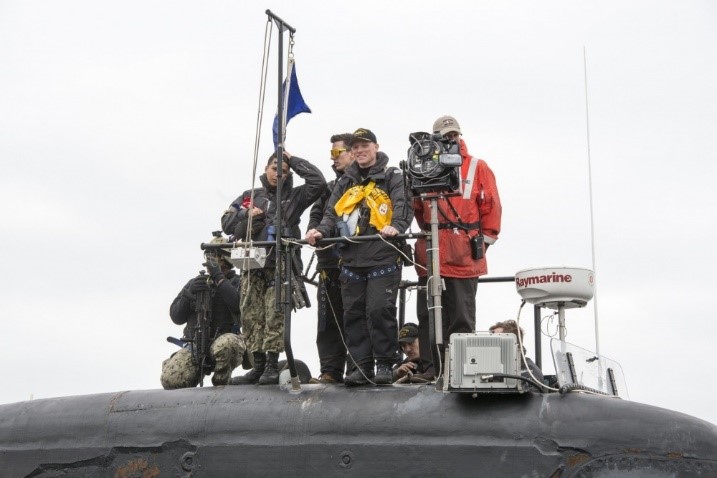 Pa Senator Toomey pays tribute, in the Senate Congressional Record, to the USS Pittsburgh and 35 year service by crew members.

Council members attended the Change of Command of the USS Pittsburgh on January 12, 2018.   CDR Neil Colston, the outgoing commanding officer, thanked the Council for its support, including visits to the city by the crew, hosting a Christmas party for the crew’s children and providing a scholarship program. The Council welcomed CDR Jason Deichler, a son of Pittsburgh, as the new commanding officer; and, of course, celebrated with a Pittsburgh traditional cookie table.

THE END OF AN ERA

The day has come to deactivate the USS Pittsburgh (SSN-720)…a sad occasion but a day to celebrate!

The people of Pittsburgh have stood by the submarine that proudly bore her name. From the launching, through many years of deployments in defense of our nation, we have faithfully supported the crew.

The de-activitation date is set for January 17, 2020 at the Naval Underseas Museum Keyport, Washington.

Links to articles about the USS Pittsburgh decommissioning

USS Pittsburgh arrives at final base for decommissioning - Tribune-Review Archive

As of January 17, 2020 there will be no crew to ‘relieve’ thus the Relief Crew will cease to exist! Thanks to all of you members who are relatively recent or have been members for many years.  A gift of a picture of the USS Pittsburgh (SSN-720), at sea (on the surface), is being provided to all members of the Relief Crew from the past few years. This photo contains the signatures of all the Commanding Officers of the boat from CDR Ray Setser through  CDR Jason Deichler.

Scholarship Fund on Deposit with the Pittsburgh Foundation

On December 2019 the Board of Directors approved a process in which future selection of scholarship recipients will remain with the Pittsburgh Council.  USS Pittsburgh crew members and their dependents remain eligible and scholarships will be chosen from the applications we receive.  For 2020 and later, individual contributions can be made to the fund designating the submarine fund as recipient

The following posts are relevant to the USS Pittsburgh and occurred prior to the initiation of the inactivation and decommission process.

Members of the Pittsburgh Council attended the Change of Command for the USS Pittsburgh, January 12 in Croton, Ct. The outgoing CO, CDR Neil Colston thanked the council for it's support including visits to the city by the crew, Christmas Party for crew's children and the scholarship program. It was the Pittsburgh Council's joy to welcome CDR Jason Deichler, incoming CO a son of Pittsburgh (a first for the boat), and family to the Pittsburgh Council Family.  We all enjoyed a Pittsburgh tradition, "cookie table" at an evening gathering.

CDR Jason Deichler is on the left --he is the incoming CO, and CDR Neil Colston, outgoing CO at a breakfast for their families/special guests hosted by the Navy League, Pittsburgh Council. 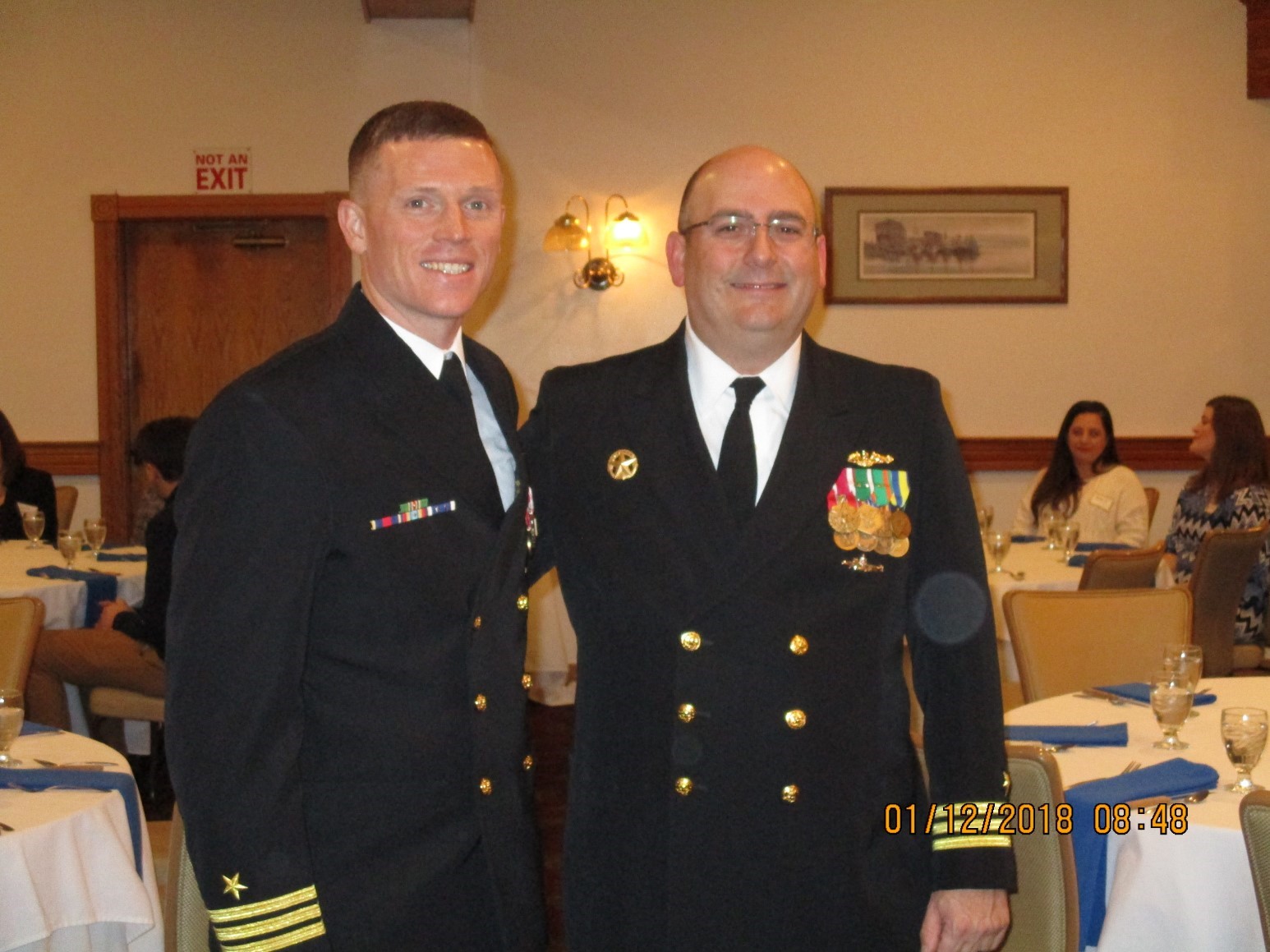 Jason M. Deichler, a native of Pittsburgh, Pennsylvania, received his commission in 1999 through the Naval Reserve Officer Training Corps after graduating from Carnegie Mellon University with a Bachelor of Science degree in Mathematics.

His shore tours include Associate Professor of Naval Science at The George Washington University, Material Officer for Submarine Group Two and the Nuclear Officer Program and Submarine Officer Community Manager on the OPNAV N133 staff.  He holds a Master of Engineering Management degree from Old Dominion University.  He is entitled to wear the Meritorious Service Medal (two awards), Navy Commendation Medal (five awards), and other various personal, unit and service awards.

Commander Deichler is married to the former Michelle Hoover of Pittsburgh, Pennsylvania.  They have four children: Hannah, James, Matthew and Ian.

Pittsburgh Council members Katherine Kersten, Polly Bozdech-Veater and John Caspero, attended the Change of Command.  The "cookie table" is a long standing Pittsburgh tradition usually done at weddings.  Cookies all made by relatives---CDR Deichler's wife Michelle mom's and friends made dozens upon dozens of cookies.


The CO, his wife and the team from the Pittsburgh Council: 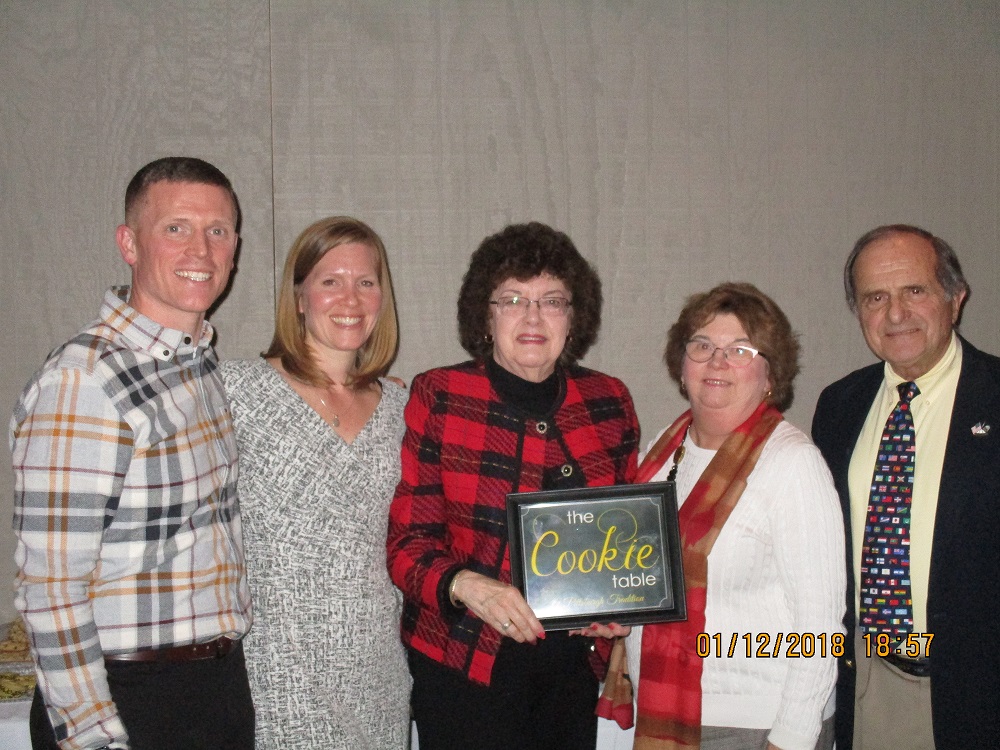 And a wonderful Thank You from the CO: 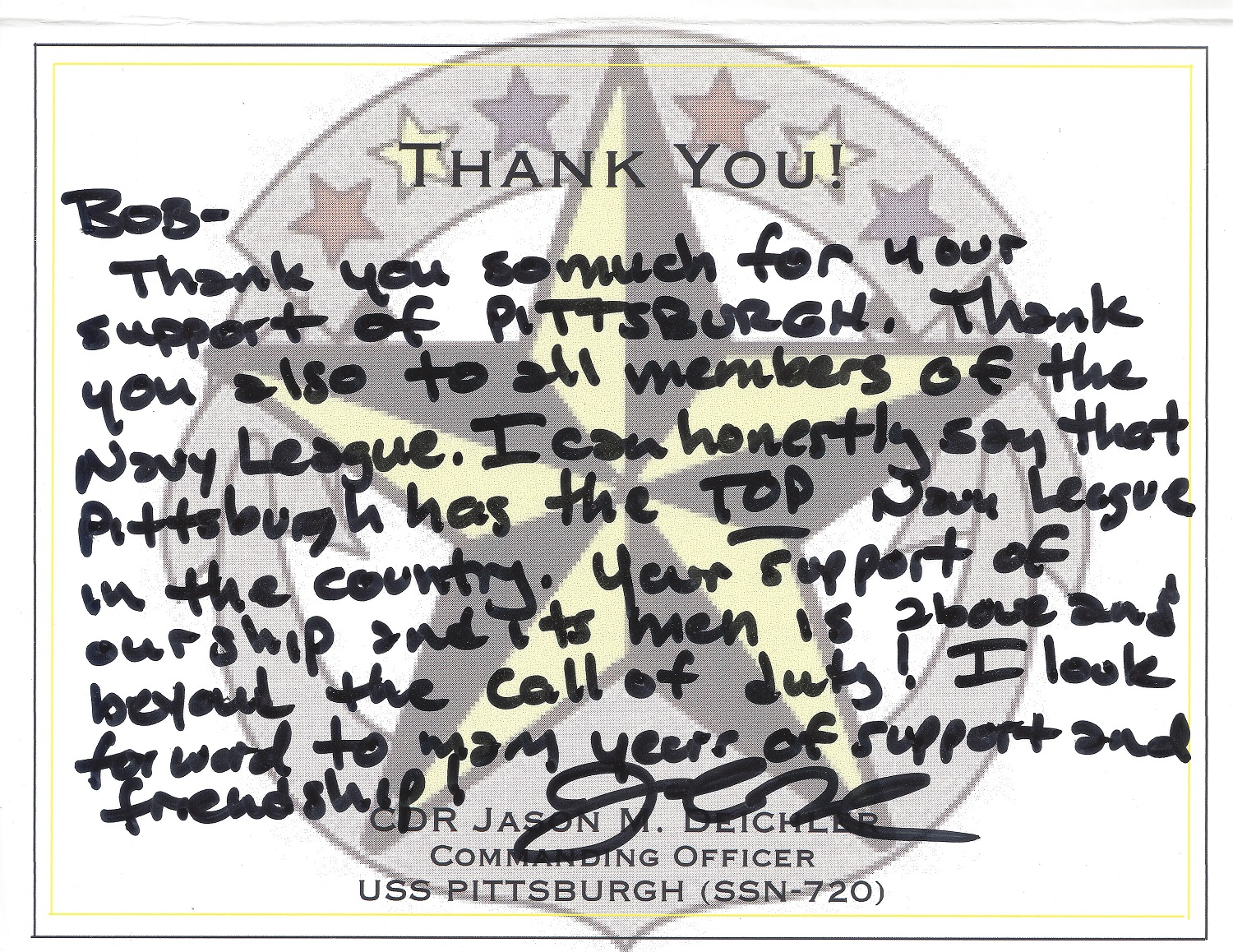 The USS PITTSBURGH SSN-720 Crew, on a port stop, holding 100 terrible towels and rooting for the Steelers. The submarine veterans of the Requin Base in Pittsburgh, sent them the towels. 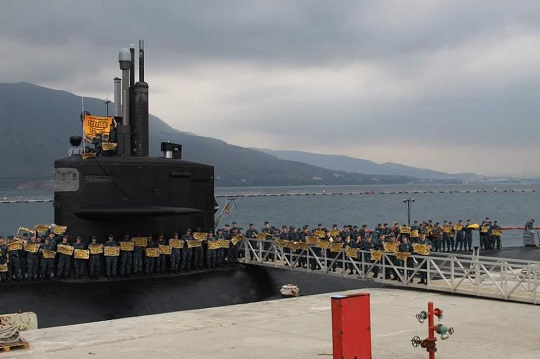 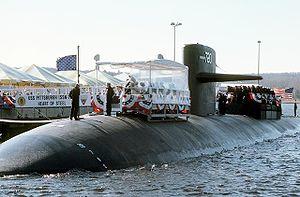